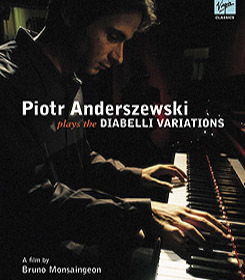 Beethoven
33 Variations on a Waltz by Anton Diabelli, Op 120
A film by Bruno Monsaingeon
Also available as a video from Video Artists International (Cat No 69231 - VHS Hi-fi Stereo)


LISTEN / BUY
BACK
Wall Street Journal (May 2002)
Shot in a recording studio in Switzerland with only the technicians in attendance, the film opens with Mr Anderszewski at the keyboard, discussing music in accented, fluent English and exquisite (subtitled) French. His swift, illuminating comments reflect a nimble intelligence, a taste for paradox and impatience with received opinion. Then comes the performance, uninterrupted and wholly mesmerizing. Shot from sometimes astonishing angles (overhead, or jostling the pianist's elbow, or over his shoulders, as if through his own deep-set eyes), the images anatomize connections between mechanics and poetics with a clarity that verges on the preternatural.