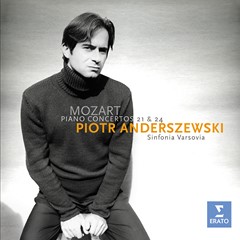 LISTEN / BUY
BACK
BBC Music Magazine (May 2002)
This is playing of extraordinary sophistication and insight. In his hands these are nothing short of instrumental operas... A recording of exceptional distinction.

Jeremy Siepmann
Le Monde de la Musique (Mar. 2002)
... the young Piotr Anderszewski brings substantially new ideas to the interpretation of the Concerto in C minor K491. Directing from the keyboard, Anderszewski combines an incisive, aristocratic and virtuosic style with subtly-nuanced playing that is both intense and spacious, controlled and free, colourful and tragic, immensely detailed and buoyed up by a natural and almost improvisatory spirit. When there is enlightenment to be found in this heady (though never unrelenting) approach, it is often the piano which reveals it... The solo line and orchestral ensemble are just as imaginative in a visionary performance of the Concerto in C Major K467 in which Anderszewski, while emphasising the larger lines (the first movement is wonderful), takes us to the heart of Mozart's mystery as few others have.

Patrick Szersnovicz
The Guardian (Feb. 2002)
[A] beautifully polished and insightful pairing of familiar Mozart concertos. Anderszewski conducts the Sinfonia Varsovia from the keyboard - modern instruments suavely played, with the tempi measured, especially in the C minor Concerto. His playing makes dramatic use of the huge dynamic range he can obtain from a modern concert grand, too - the first solo entry in the C minor is like a whisper, and there remains a hint of introspection about his contributions. The cadenzas are Anderszewski's own and never outrageous or less than tasteful, and they really define the character of the whole disc, which contains both exquisitely shaped piano playing and carefully worked dialogues between the soloist and the orchestra.