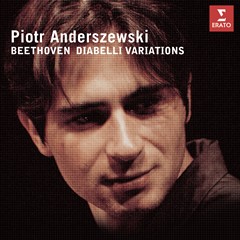 BEETHOVEN
33 Variations on a Waltz by Diabelli, Op 120

LISTEN / BUY
BACK
Daily Telegraph (May 2001)
The mastery of technique can be taken for granted in Anderszewski's playing, but you have only to listen to this disc to appreciate the extraordinary level of intensity with which he is able to convey his own fascination for the music's inventiveness. Intellectual concentration is blended with freedom and fantasy in encapsulating the contrasted temperaments of the 33 variations...

This playing draws you right inside the fertile mind of a composer who could find so much to divert him in Diabelli's innocent little waltz. With such a command of keyboard colouring and vital, searching interpretative spirit, Anderszewski gives a performance that is as original as it is riveting.

Geoffrey Norris
Gramophone (Aug. 2001)
This is the most intelligent, searching and sheerly delightful account of the Diabelli Variations to have reached us since Alfred Brendel's... It is an account of the Diabelli based on a much closer reading of the text than one usually gets, and you have only to hear the theme and the first variation to perceive an exceptional balance of rigour and imagination: rigour in the way Anderszewski has thought about every inflection, local or long term, marked by Beethoven; imagination, evident here and throughout, in the quality with which he has realised them in terms of expression and vividness of character. His rhythm is tremendous. More remarkable still, I think, is his feeling for dynamics, so copiously prescribed in this work and yet treated with approximation by so many players. He is someone to make you aware, like the best conductors, of how integral the dynamic element is to the full life of the music in Beethoven.

Stephen Plaistow
Répertoire (Aug. 2001)
At thirty-two, Piotr Anderszewski is recognised as a pianist to follow. This recording was made in parallel with the filming of a documentary by Bruno Monsaingeon, in which we see Anderszewski preparing for and recording this CD. It is immediately clear that his interpretation is characterised by a terrific precision... At every moment each polyphonic episode, the slightest breath, phrase, inflexion and dynamic are carefully calibrated. Moreover - and this is perhaps the principal merit of this version - the sound, the colouring are tremendously imaginative.

Jacques Bonnaure
The Guardian (Nov. 2001)
Anderszewski has always been a thrilling, unpredictable pianist, and the Diabelli Variations have occupied a central place in his repertory. This is an account of ferocious extremes: switchback rapidity and languor, black humour and transcendent simplicity. Technically, the playing is exceptionally secure. It is the interpretation that is balanced on a knife-edge, and Anderszewski's high-risk strategy succeeds brilliantly.