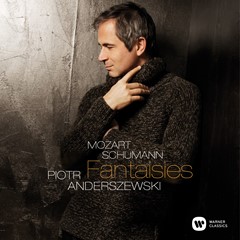 Mozart Fantasia in C minor K475
Mozart Sonata in C minor K457
Schumann Fantasie in C major op 17
Schumann Theme and Variations in E flat major WoO 24 , 'Ghost Variations
"I can hear in the music of both composers a similarity in their processes of giving physical form to their inspirations. The cruel resistance of the blank page feels, in both cases, inexistent, ignored. And therein lies an important, precious connection between Mozart and Schumann: an unobstructed directness to their music, in which the purity of intention remains intact." - Piotr Anderszewski


LISTEN / BUY
BACK
The Guardian
"All the performances show the lucidity and objectivity that have always been such outstanding qualities of Anderszewski's playing...He brings the same qualities to a touching performance of Schumann's last piano work, the so-called Ghost Variations."
NPR (March 2017)
The pianist closes the album with music from the other side of Schumann's career  at the very end, when the composer's mind had started to crumble. Hardly anyone plays Schumann's Ghost Variations, but Anderszewski's detail to light and color makes a strong case for this undervalued music. The tender, gently swaying theme came to Schumann in the middle of the night.

Five variations on that theme follow, including an agitated one where Anderszewski lets the tune smolder in the bass while sparks fly above. It closes with a kind of musical enigma as the theme gets swept up in a whirlwind of notes.